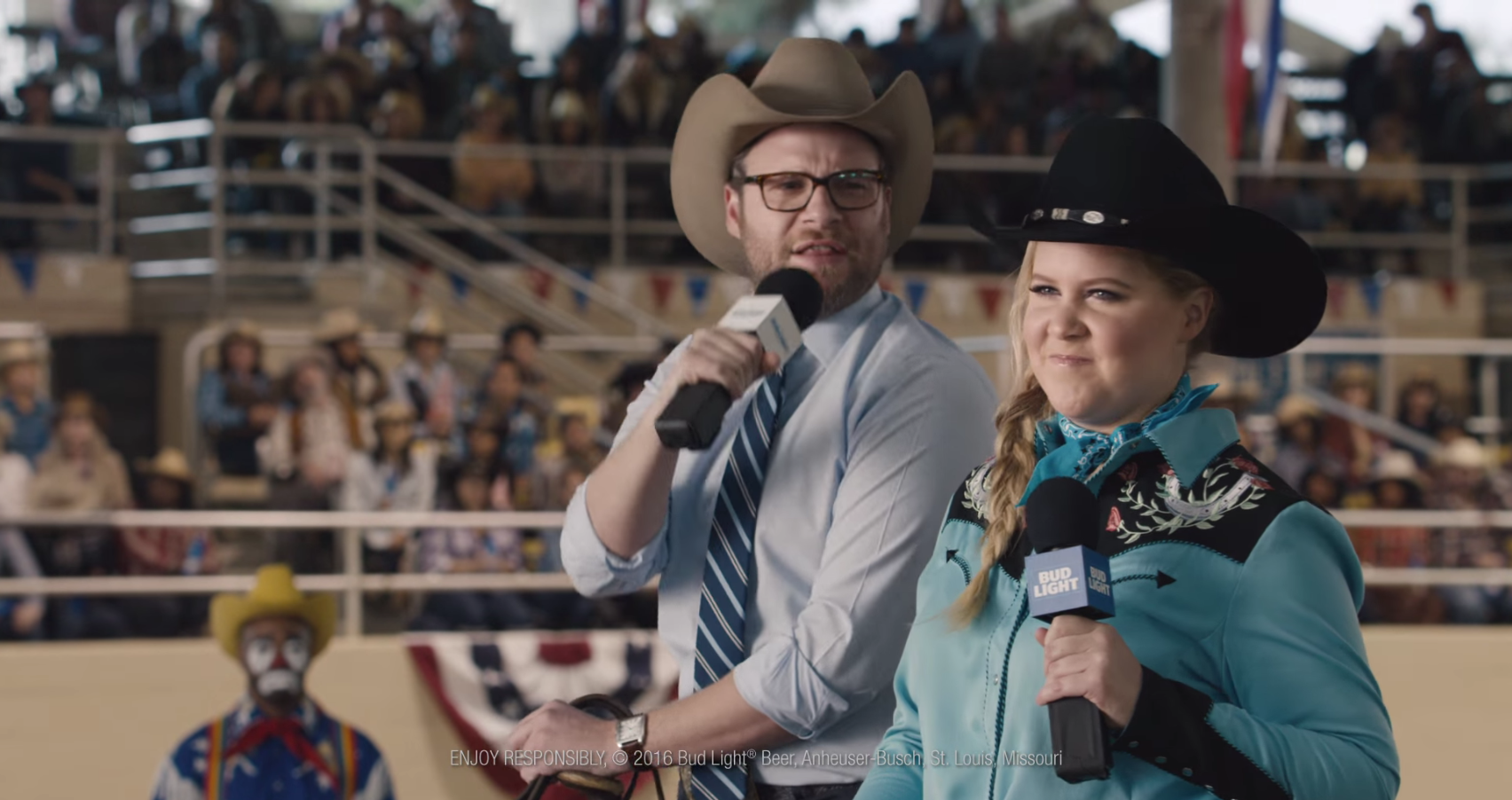 Ah, the Super Bowl. The one event in which you don’t use the commercial break to load up on wings or use the bathroom because well, they’re often more entertaining than the game.

Honestly, this year didn’t stand out. Most of the commercials were a let down, but there were a few that stood above the rest that I’m especially excited about.


This one. Hilarious. Amy Schumer and Seth Rogen absolutely nail it, and Anomaly out of New York knew exactly what they were doing. The writing is just flat out hysterical and the context of an election year is perfect. The independence day allusion is unbelieveable, and they nail their frat or former frat boy audience that wants to get their drink on but still have some kind of a body.


Millennials especially enjoy it when the fourth wall (even if it’s a hypothetical fourth wall) is used in a commercial. T-Mobile does it beautifully by using it to mock their competition, producing this piece with Publicis an agency in Seattle and with creative director Earl Wallace IV.


Again, exceptional audience analysis on this piece by Anomaly in New York. The beauty of this ad is in the ability Budweiser has to isolate its target demographic; it isn’t about craft beer lovers. It’s about the normal guy, doing normal work, that makes the world run.


Humor is found in the unexpected. And Doritos shows just how to do it. The initial surprise of the baby reacting to the Dorito engages the audience early on and knocks it out of the park as the baby literally flies out of the mother.


What could be more interesting than dogs in costumes flocking to people in costumes? The geniuses at David, an agency in Miami, worked on this one. The classic music, the slow motion. It just fits perfectly. As they say, cute sells.


Simplicity is always best. Iris in New York managed to break all the rules while following a crucial one: it’s all about the eyes. The vast majority of the commercial is composed of portraits staring straight into the camera. There’s just something about eyes that bring about connection. This, along with the beautifully written VO, makes you laugh and cry all within 60 seconds.

I hope you all enjoyed these commercials as much as I did. What were some of your favorites from this year’s Super Bowl?

CS 1.6 is the most popular and most played multiplayer first-person-shooter till now. The game is being played in every continent of this world. Also in, every gaming club, with every Pcs and Laptop and even on nearly Xbox machine.
CS Global Offensive:

CS GO originally was a modification of the Half-life game which had already been made in the late 1990’s. This FPS game is a tactical and strategy based game which tests the thoughts and responsive mastery of the gamer. Valve Inc took charge of coding this game in the year 2000, rebuilt it by adding some new new and hand made addons to CS.
The secret the timeless features of CS CZ is the choice to [url=https://central-servers.net/]run your own server[/url]. This allows a whole new battlefield for players to imagine clan server and play with others. With such a privilege available to players the entertainment is never-ending. When the game came out admins used Dedicated Servers to run their CS CZ Servers. In modern day teams host with a [url=https://central-servers.net/]EPYC VPS Server[/url] and always have low latency in Counter Strike Condition Zero.

Counter Strike Global Offensive has been a source of entertainment for the kids since its launch. The question is how come? Well, it is because it is that style of multiplayer which won’t actually gets boring even if one plays it for month after month.
This is why CS Condition Zero is interesting:

One can simply never get bored of [url=https://0v1.org/forums/#gaming.12]this game[/url] since it allows the player to customise it according to their methods and preferences. One of the main uses of this freedom is called “ESP”. [url=https://leaguecheats.com]CS Aimbots[/url] are the most funny scenario of online shooters and all of the gamers have actually become the hackers by the time they’re skilled at the game. Some may want to play the game on the base skill and the maps with which they are familiar with but the point is that most of the elite gamers just want some different things to climax their interest in Counter Strike. LeagueCheats software works on WarGods, WarGodz, sXe injected, [url=https://leaguecheats.com/wiki/esportal-cheats-hacks/]Esportal[/url], GamersClub, EAC, Challengeme.gg, 99damage, FaceIT, SoStronk, PVPRO, GOLeague, ChallengerMode, FastCup CSGO, Akros, Valve Anti Cheat, VACNET, Gfinity, CEVO, ESL, FaceIT Server Side, SourceMod Anti cheat, KAC, PopFlash, Kickback, and ZenGaming. [url=https://leaguecheats.com/store/]CZ Aimbot[/url]

So, groups can dream up different maps for their own feeling or for their dedicated servers. Isn’t it great that you play every match on all of the maps and then clans try to get skill with that particular map by playing over and over via spectacular engagements. This in my perspective is the universal
reason why no one will ever quits even after lots of gameplay.

The maps can be built through various programs and software, which are always free to use and one can be proficient in it by watching YouTube tutorials. Most people know that Counter Strike Condition Zero came with hundreds of levels but the statement is that it came only with some simple maps but over time the gamers created some different distinct maps on the Valve Hammer platform which the users have been installing them via different websites.

Another thing which is keeping Counter Strike CZ fresh and exciting is the ability to make your own listen server. One can make a separate root for their own team so that they can have some epic battles with each other or they can invite other friends for a PCW. As previously discussed teams can have a [url=https://central-servers.net]2400G VPS[/url] and always have smooth game play in CS 1.6.

Again, there are also many epic spray logos available which the users can make and can spray them on the walls or anything else ingame. The spray logos usually show the picture of the particular players or clans.

In other words customising Counter Strike 1.6 was never so easy before. Now one can never get used to this timeless online game.

Also, basically all the shooters that have various modes typically have several features that always provide the users with noteworthy moments spent using the PC. Whether you are a child or already oldie it is impossible not to have played Counter Strike CZ once.

I truly wanted to post a brief comment to thank you for these fantastic tactics you are sharing at this site. My considerable internet research has at the end of the day been honored with extremely good knowledge to write about with my guests. I ‘d point out that many of us website visitors actually are very much fortunate to dwell in a really good place with so many awesome individuals with valuable concepts. I feel extremely privileged to have used your web page and look forward to tons of more awesome moments reading here. Thanks a lot once again for all the details.

I was just telling my friend about that.

Right away I am going away to do my breakfast, when having my breakfast coming over again to read further news.|

adtingdating can ibuprofen be taken with azithromycin funcionaba zithromax z pak 250 mg price buy
zithromax 250 mg – azithromycin near me [url=http://zithromax1.quest/#]generic name for zithromax[/url] vergrype what is
the best way to take azithromycin

It’s truly very complex in this active life to listen news on TV, therefore I only use internet for that reason, and get the most recent news.|

how to get hydroxychloroquine prescription online
May 7, 2022 at 2:19 am

Hi there colleagues, pleasant piece of writing and fastidious urging commented here, I am genuinely enjoying by these.|